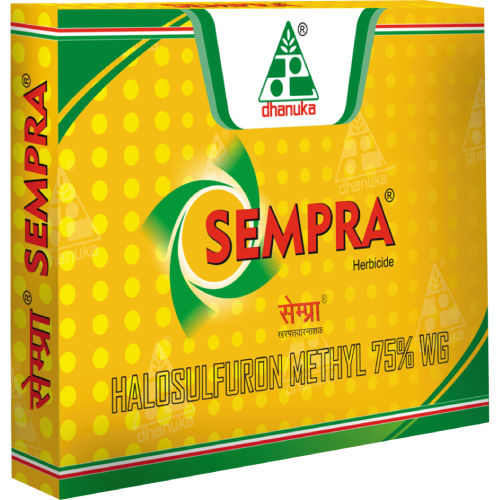 SEMPRA is the first herbicide introduced in India by Dhanuka Agritech Ltd for effective control of Cyperus rotundus. It is a selective, systemic, post-emergence herbicide with WDG formulation for effective control of Cyperus rotundus from nuts in Sugarcane and Maize crop.SEMPRA has strong systemic action i.e. moves in both ways through Xylem & Phloem. SEMPRA stops the metabolic functions of Cyperus by stopping formation of the amino acids (Valin, Isoleucine, Lucine) which is responsible for the protein required for growth of the Cyperus resulting in yellowing of its leaves & nuts becoming darker & further destroying it in 14-30 days. SEMPRA has been extensively evaluated and recommended by institution/ universities like Vasantdada Sugar Institute (Maharashtra), Tamil Nadu Agricultural University, Regional Research Station (Haryana Agricultural University, Hisar), Agricultural Research Station (University of Agricultural Sciences, Dharward), U. P. Council of Sugarcane Research, Narendra Deva University of Agriculture & Technology, Faizabad (UP).SEMPRA is internationally registered in countries like India, Japan, U.S.A, Australia, Mexico, Brazil, Colombia & South Africa.

SEMPRA, being a sulfonylurea group herbicide, inhibits acetolactate synthase (ALS), which is the first enzyme in the biosynthetic pathway of the essential branched chain Amino acide (Valine, Leucine & isoleucine). Inhibition of ALS leads to the starvation of the plant (Cyperus rotundus) for these amino acids, resulting in death (killing) of weeds. For crop plants, in the grass family like maize sugarcane, etc. there is no effect of Sempra as these plant have strong MFO (mixed function oxidases) which breaks down the herbicide molecule to acid metabolite forms.

We, Dhanuka Agritech Limited, hereby bring to the notice of all concerned that fake job offers are been circulated on behalf of Dhanuka Agritech Ltd. by certain individuals/entities by sending false emails and asking the job seekers to pay processing fee to get the interviews done. We at Dhanuka Agritech Ltd. follow an extremely professional and comprehensive recruitment and selection process where:

2) We don't ask our vendors to arrange any online interview like skype or google hangout etc. It is only arranged by Dhanuka Recruitment Team.

3) Dhanuka does not ask for any processing fee or security deposit against any interview or Background verification and neither any of our recruiting agencies charge any amount for processing the profile for recruitment process.

4) The offers are always made directly by Dhanuka Agritech Ltd. and not by any third parties.

• Anyone making an employment offer in return for money or other type of gain is not author,. by Dhanuka Agritech Ltd. and is not offering an approved job.

• Dhanuka Agritech Ltd. reserves the right to take legal action, including criminal action, against such individuals/entities. All vacancy in Dhanuka are listed in the company's career webpage: https://www.dhanuka.com/current-openings in addition to being advertised in the job portal.

If you receive any unauthorized, suspicious or fraudulent offers or interview call, please write an email us at recruitment@dhanuka.com